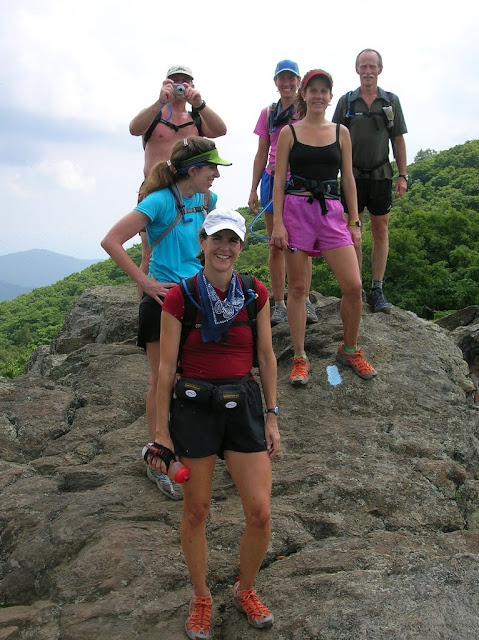 I came across this photo the other day and it brought back a lot of good memories.  It was taken somewhere along the AT in Shenendoah National Park.  It was August of 2006, my first exposure to the VHTRC, and the first time I'd ever run over 26.2 miles. This run was all part of a cabin weekend and was the day I really got hooked on trail running and the VHTRC. I didn't realize it at the time, but this small group standing here along with the larger VHTRC family would have a major impact on my future weekend activities and my life.

Some fond memories of this run:

The route was on and off the AT, with some steep ups and downs via connector trails, with stops for breakfast, a historic tour of the former summer home of Herbert Hoover (?), some stream soaking, and a late afternoon ice cream stop right near the end.  Early on we stopped for breakfast at a wayside along Skyline Drive (Big Meadows?) where Tom proceeded to consume more than I had ever watched anyone consume during a run.  I was in awe, but also curious as to how this was going to work out for him.  About 5 minutes into the run I found out, as he left it all along side the trail. 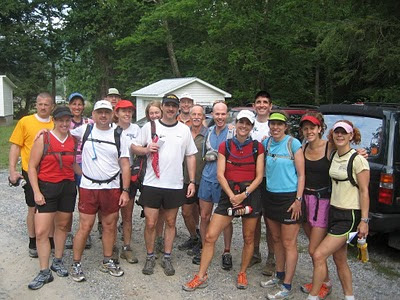 I had absolutely no idea what I was doing.  It was August in Virginia and I wasn't used to carrying anything while running, but I did have along a waist pack that held 32 oz of water.  I was thirsty much of the day.  Luckily Sophie and Kerry were kind enough to share once they realized the newbie was about to pass out.  I was also starving, having brought along maybe a couple of packs of Sharkies for what turned into an 8++ hour adventure.  Sophie saved me with some dried fruit and nuts, and between Sophie and Kerry, they managed to keep me alive until we finally made it to the camp store and ice cream.

Quatro taught me a thing or 2 about running downhill as he flew by me on more than a few occasions.  I watched from behind, in awe.  I have since learned to run recklessly downhill.  I remember wondering why people kept walking the uphills.  Again, this was my first run with a group of ultra runners, and I'd never seen anything like it. 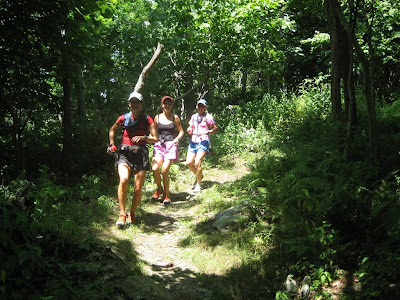 Holy Tit harassed me the entire weekend.  He kept screaming at me to shut up (I can be quiet at times, especially upon first meeting a group of crazy outgoing runners who have been sitting around a campfire drinking beers for hours).

I drove from DC with Kerry and Kirstin and they adopted me.  This weekend would soon be followed by many more weekend adventures at Kerry's new training center in Front Royal--Portabello--and the ongoing search for a suitable pool boy (yet to be identified). These were also the days when WUS (the Woodley Park Ultra Society) was founded and my Tuesday nights were taken, too.

The pain following this run was intense.  I thought my quads were broken and would never be the same.  I seem to remember the distance as 34 miles; I think we named this one Quatro's death march, but many runs could be called the same. Never had I run this far over such varied terrain.  I distinctly remember watching others frolicking about the next morning at the cabin and realizing that I was alone in my extreme pain.  These people did this all the time, and it didn't even faze them.  Little did I know, that I would be sitting here 4 years later, 10 days after a 50 miler and 10 days before a 100K, as one of them. 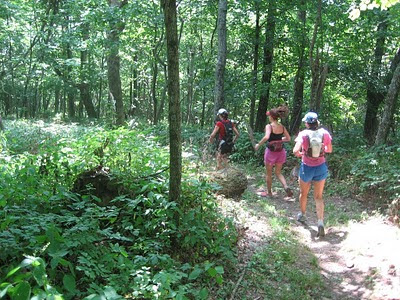 This post brought a huge smile to my face. I have often thought about that awesome Cabin Weekend 2006, how much it symbolized the best of the VHTRC, and how much of an ADVENTURE it was...we had not run many of those trails before, we went dry, and (my favorite memory) we were trying to beat the clock to get to the Lewis Mountain Wayside cabin before it closed at 8:00pm. I absolutely LOVED the feeling of running all day and into the dusk with no plan, except to get to the end of the run in one piece!

And, little did Kerry and I know that we were "grooming" an elite ultrarunner as we trudged up Pecosin Trail and that gorgeous waterfall and tried to convince you to run Bull Run as your first ultra!

Kirstin remarked at Cat's that Portabello has been awesome in so many ways, but it contributed to the demise of the Cabin Weekend as we knew it. I have to agree...one of these days, we need to have another Cabin Weekend, just like the "old days".

It has been really fun to watch you kick some major west coast tail out there...we are proud of you!

Wow, thanks for bringing back those memories. I remember I was recovering from Vermont so I did a short route, then we scrambled to go find you all as darkness fell, worrying how insane the long day would be to the New Girl!

I got a little teary. Miss you Amy!

Don't you love the trip down the memory line? I was recently flipping through mjy photos of first races, and first trail adventures...you know, digital will just never be the same as looking at the real photos.

Miss you too, Kir! I fondly remember thinking you were nuts, as you scaled the fireplace chimney.

Sophie, glad you enjoyed it. What an awesome weekend, indeed! Funny how some runs blend together, but so many memories from that day stand out vividly in my mind. Especially that trudge up Pecosin and making it to Lewis Mtn before they closed. And then, the sprint down that final hill....good times. I vote for an Oregon version of cabin weekend. Just name the weekend, and I'll find us a sweet destination.

Olga, you're invited, too!

Your post is inspirational! I am someone who has adored the idea of running for years but has yet to find the love of it. In fact I tend to hate it. It hurts, I get winded and thirsty. I ran on the Wildwood trail for the first time last week and fell in love. Is that all I needed? Just some trees and inconsistent terrain? I was euphoric and sore as all get out the next few days but holy wow! Now, I sit trying to figure out how to make it happen more often, how to get better at it, how to not feel like I'm going to die a half mile in...yes, I said a half mile...this lady is NOT a runner...yet.

Super-cool post, Amy! I think many of us have similar memories of our early ultrarunning days. Very cool!

One thing that I miss about physical albums. It is that you can find some memorable pictures that you will go back and check them again.