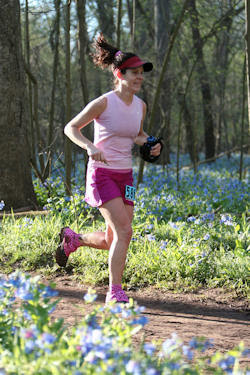 This was my 3rd year running the Bull Run Run 50 miler--I've run it every year and it's a favorite. I won BRR in 2007 in what I considered to be a bit of a fluke (lucky day), and slogged through it painfully last year on dead legs after having run a fun down-hill 35-miles in Bolivia the weekend prior. I was hoping for somewhere in between this year...a solid training run for the MMT 100 coming up in a month.
I had no intention of 'racing' BRR; I hadn’t even decided to run it until a couple of weeks ago, and decided to run it because I hoped that two 50 milers and two 50Ks scheduled within a period of 5 weeks would be enough to get me feeling in shape for MMT. I also planned to hit 80 mile weeks for 3 weeks in a row, with BRR coming on the Saturday of the second week, sandwiched in between the Chocolate Bunny and Promiseland 50Ks. I haven’t actually quite hit that goal, ending up with 77 miles the week of Chocolate Bunny and 75 miles the week of BRR, but pretty close. I'm not a mileage whore--80 miles is about as high as I get. So, I had no plans of running hard, but somehow in the first mile, got into the lead and then just never backed off. I'm still calling it a training run, just more of a tempo-paced training run than I had planned for.
I felt strong on the first out and back (16 miles) and really enjoyed the first section of trail. I’m not sure if I have ever even noticed the bluebells in years past, or at least they hadn’t caught my attention like they did this year. They were in their full glory and were stunning! 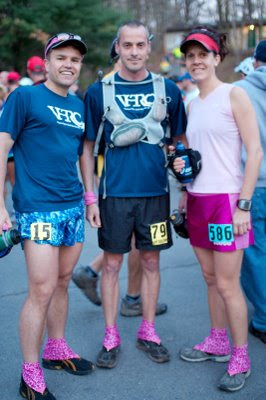 I started to worry a bit around Hemlock (start/finish) when I realized I was going to have enough Gus to get me to about mile 30. I hadn't thought about gear until the morning of, and had some gear issues--brought along a Nathan bladder for my Camelbak--so used a handheld water bottle instead. Lately I've been sticking to an all Gu diet on short runs (did I just call 50 miles a short run?), especially on a warm day like Saturday. It's hard to cram more than 3 gels into my handheld pocket, and any more than 2 gels in my skirt weigh it down to the point of falling down. An issue. So, I had 5 gels along for what I was hoping to be a sub 9 hour run. Not so smart. But there is always aid station fare.
I felt generally crappy from about mile 20-30. I was having some abdominal pain and decided that I have a hernia, and then just focused on that for a good 10 miles along with some butt/left hamstring issues, which bug me normally. I probably should get the abdominal pain checked out, but the pain went away after about mile 30, as good pains often do, so I stopped thinking about it, and enjoyed the Do-Loop. I got a gift of Gus from Bryon upon entering the Do-Loop, so my concerns of bonking were lifted. The Do-Loop kind of sucks, in general, but didn't suck as much as I had remembered it sucking in years past 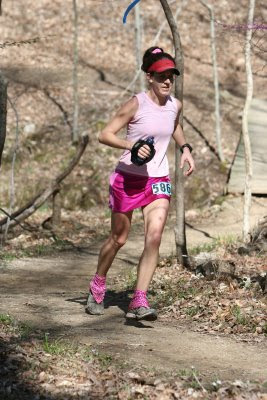 . It's a lot of short steep ups and downs with heavy leaf cover that makes footing a bit tricky, but it's only 3 miles, so ends sooner than later.
Upon exiting, I asked where the next woman was and was told that Justine had entered the Do-Loop 16 minutes back and that Keith was 30 seconds ahead of me after the Do-Loop. That motivated me to pick up the pace a bit to widen the lead and to catch Keith, as I'm never anywhere close to Keith. I passed Keith at the Fountain Head AS (38) on the way back without even realizing it, so then continued to chase him on towards Wolf Run Shoals (40), where I eventually figured out that he was behind me. I felt really strong from the Do Loop (mile 35) until about mile 43. Luckily Greg Loomis caught up with me at about that time, and we pushed it in the last several miles together. I like to run alone, but it was nice to have Greg's company for those last hard miles. He made the last 5 miles go by much more quickly. Greg and I finished together in 7:34.05, good for 8th overall, 1st female and just a couple minutes shy of Anne Lundblad's course record. The warm weather affected many people, but being that I wintered in El Salvador where it was 80-90 degrees and sunny every day, I had a bit of an unfair advantage.
And in other exciting news, the WUS Pink Mafia team of Keith Knipling, Brian Schmidt, Todd Walker, Justine 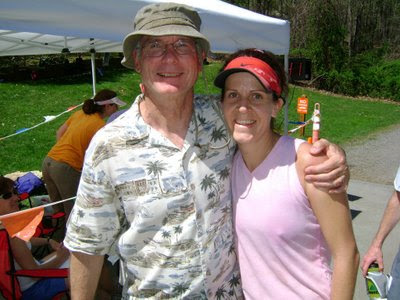 Morrison and I cleaned up in team competition, beating our nearest competitor by a ways. Hence the obnoxious pink offit I'm wearing above....
Bull Run is a good course for me. It's hilly, but run-able, and technical enough to not be boring, but not so technical as to require much rock hopping, although there are a few short rocky sections along the river. The aid stations are top notch, with great VHTRC volunteers/friends, and the party at the finish line is always fun--good food and catching up with friends. My apologies to aid station workers I encountered from Hemlock to FountainHead, as I was a bit grumpy. This was Anstr's first year as RD, and he and his fabulous volunteers pulled off another great BRR. I teared up at some point in the last 5 miles, maybe in pain, but also in thinking about how much I love the VHTRC--what a great group of people! I really missed the club while I was in El Salvador (although I love my ES running group, too). 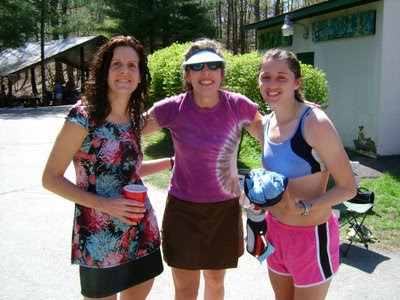 Regarding BRR, I will definitely be back. In 2007, I felt my win was a bit of a fluke/lucky, and that I'd never be able to approach that effort again. While I ran a good time this year, I didn't feel great throughout, and feel like I could go faster on a good day.
Maybe a lesson learned is that I do better when I don’t think about a race at all. I tend to get nervous about races, and for that reason, don’t love racing. Being that I didn’t plan to race, I wasn't even slightly nervous. I don’t think that this particular tactic will work with MMT next month, as it is hard not to focus on the 100 mile rock-fest that is MMT, or go into it as a 'training run,' but at least in 100 miles there is plenty of time to settle nerves.
Now it's off to a truly slow effort at Promise Land 50K++ this weekend, which I plan to take at a leisurely pace and enjoy the views.
(Photos courtesy of Aaron Scwhartzbard and Quatro Hubbard)
Posted by amy at 6:03 PM

Congrats again on a terrific run, Amy. You are on a roll and getting faster! Enjoy it. One day you'll be 46.

I see you are planning to run Waldo---one day I would love to run that race. Looking forward to hearing all about it.

Have a fun at PL and I will see you at the MMT finish line--have a great day out there!

p.s. I know the feeling about getting weepy when thinking about the VHTRC---they are THE BEST!

Thank Sophie. I sure hope that I'm 46 one day. PL was gorgeous, as always. Water levels seemed up, and the falls were the largest I've seen them.