Another new treadmill record falls, so does treadmill

Again, desperate times call for desperate measures, so Friday afternoon I headed down into the cave with a liter of water, a cookie and The Hangover. A colleague, Bill, helped me set up the movie projector so I popped in the Hangover, turned the volume up loud enough so that the guards and neighbors could surely hear it from above, and jumped on the treadmill.

The Hangover is 90 minutes, and was funny enough so that when it started over automatically, I just let it play a second time. The first time through I missed some great lines, as I couldn’t make out the words due to the echo in the cave. By the second time, I was able to hear the dialogue through the echo, and any entertainment is better than staring at a blank wall. Occasional fits of laughter would start a fit of coughing, so were ill-advised. I’ve been coughing continuously for 10 days now. I caught a cold on the way over, and the air in Kabul doesn't seem to want to let it heal.

After 100 minutes, I dialed Bill on his cell phone and asked him to deliver me a coke, and some more water, which he was very kind to do. I didn’t feel like heading upstairs, fearing that once I stepped off, I might not step back on. By the time the movie ended a second time, I managed 3 hours and 3 minutes, which was good for just over 20 miles. I wasn’t moving that quickly, 9 minute pace, but it counts for this week’s long run. I've heard of 24 hour efforts on treadmills....why? I'm satisfied to let my 3 hour and 3 minute record stand.

Apparently the treadmill didn’t enjoy my 20 mile run nearly as much as I did. The treadmill, which has been acting funny for the past week, is dying a slow death. There is now a groove running down the middle of the band, which when stepped on, causes the whole thing to jerk. It feels kind of like running across a snow-covered icy road....you never know when you're going to start sliding, which is what the jerking motion feels like--sliding across ice. So, I'm getting in my share of what feels like winter running. I managed 60 miles last week with one off day. Averaging 10 miles a day on a treadmill is not bad considering it's really not that much fun.

So, to replace the soon-to-be broken treadmill we went out shopping today to see what's available. Just in case one didn't already feel inferior as a female in Afghanistan, the treadmills that can be purchased here drive the point home again. Check this out, it's a photo of the control panel on the treadmill.....anyone care to interpret? 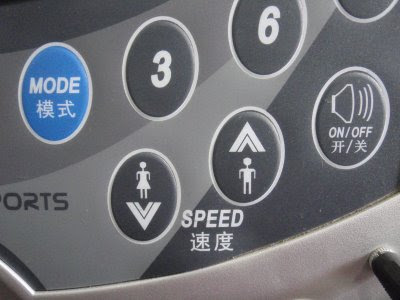 Here is a great chance to drive a large number of visitors to your blogs and websites for free.

Submit your websites, blogs, videos to http://www.zillionsb.com and get 1000s of targeted visitors everyday for free. It also helps your websites/blogs gain valuable backlinks.

Let the other bloggers cast their votes to push your posts up for a greater visibility. Enjoy a free, huge traffic to your sites.

Hi! I found your blog by someone who joined mine. I have to say it was so interesting to find someone who is doing so many interesting things. It seems like even after the tear in your ligament you will continue running. And going to the Middle East for work. Not only are you braver then I, but you seem to be quite interesting in work as well as this interesting blog about your running. I am afraid I am past that time in my life, I am 59 and have mild emphysema, but I will stop back and read because you have made this blog so very interesting. Beautiful pictures also. My blog is about couponing so if you are interested stop by. http://amazingcouponanddiscountdeals.blogspot.com And keep running, I really enjoyed reading your blog.