Yesterday, I set a new personal treadmill record for the most boring run in the history of treadmill running. 17 miles in an underground room staring at a blank wall. I tried to set up a DVD on my laptop, but technology failed me, and I was left to stare at the wall and think. I wanted to get in a long run and 17 miles is the lower limit of what I allow myself to call a long run. But it's enough lest I begin bashing my head against that blank wall at which I was staring.

For the most part, I avoid running on treadmills. Why run inside when you can run outside? Unfortunately, I'm spending 5 weeks in Afghanistan for work, so I cannot run outside. There are few places I've traveled to where I feel like I can't run outside, but Kabul is definitely one of them. Things are a little tense over here at the moment, and a foreign woman running down the streets scantily clad, would probably not help matters. 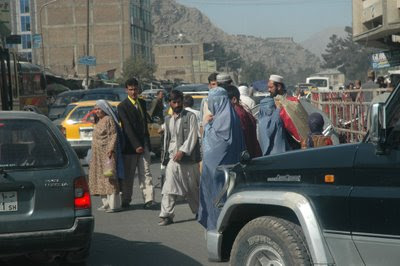 I'm still having ankle issues, as I've been dealing with some posterior tibial tendonitis. I was told to take 2 weeks off running following Laurel Highlands, and I did, but it doesn't seem to be getting any better. One good thing about the treadmill is that running on flat surfaces doesn't seem to bother it, but at the same time it's not necessarily healed, as it still feels stiff if I turn my foot inward. I'm hoping that it will clear up in the next few weeks, as trails are what really seem to irk it, and there's definitely no chance I'll be running on trails until mid-August.

I'm signed up to run Where's Waldo in August, but it's not going to be pretty. The combination of a couple of weeks off, and now a fairly crappy training environment, along with having gotten fairly sick in the last couple of days and in danger of hacking up a lung, are not leaving me confident that I'll be that fit come mid-August. I have considered bailing, but the trip is also tied to seeing some friends from Peace Corps that I haven't seen in ages, and I've never been to Oregon, so don't want to cancel. At least the scenery will be nice, and I will be running freely in the mountains.
Posted by amy at 12:28 AM

I've spent a lot of time in Afghanistan and especially Kabul. I actually know the streets of Kabul better then DC. I was sick at least once a month over there due to the Kabul "crud" and basically just ran on the treadmill. Just keep your head up, and remember it could be worse....I did a 13month tour over there once, but I always thought the Afghans were such nice hospitable people. Stay safe. If you need anything...give me a holla.

Get some Graston for that ankle.

John Dewalt drives over 2 hours to see his specialist.

I beleive you had such a strong spring season that physically you will have no problem at Waldo. And you just did 17 miles on a treadmill, so mentally you are pretty tough, too. I bail at 2 miles. Ok, was just checking what the female winner off MMT 100 is up to. Impressed again. Good luck.
Suzanne

I hope your inwarded foot was healed soon! Do not risk too much next time!