Just what I needed: Bridge of the Gods Century Ride 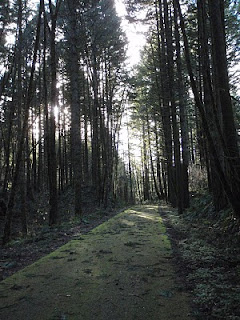 I took advantage of another gorgeous sunny winter day (people lie about the weather here—they just don’t want any more migration into the state) to do a loop I saw advertised on a great riding site. The ride takes you across into Vancouver, WA and then up the WA side of the Columbia Gorge, over the Bridge of the Gods, and back along the OR side of the Gorge.  I'd only been to the Gorge once, and that was driving over on I-84 on my trip out here, and it was stunning.

The ride was advertised as 89 miles and scenic. I live about 7 miles from the start of the trail, so figured the ride would be just about 100 miles by the time I connected with the 205 bike path trail that leads into Vancouver, WA. I got a bit of a late start, considering the distance and that I didn't really know where I was going, and finally got going by about 11. I figured that I might have a hard time finishing the ride in the light, so grabbed a headlamp on my way out the door. It took me a long time to leave the city and find the bike path over the river into Vancouver and I asked several friendly bikers, about half of whom turned out to be fairly clueless, as I'd head off again in the wrong direction. Anyhow, I finally found the 205 bike trail which takes you down the middle of 205 and over the river. Kind of an odd little bike path, but it took me to where I wanted to go, the Evergreen Highway and eventually to the Washougal River Road. The Washougal River Road is a winding, climbing road, with minimal traffic that seems to keep gently climbing for miles along a beautiful little river. 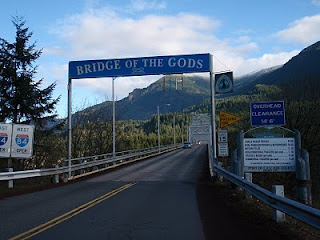 I set a turn-around time of 2 p.m. in my head, thinking that if I were smart, I'd turn around 3 hours in, in order to be back at my house by 5 p.m. when the sun would go down. Sometime after 2 p.m. I had made it as far as a little store on Hwy 14 and asked the guy how far I was from the bridge, thinking I was probably a couple of miles. He said 5, so I figured it was more like 3, and decided to go ahead and go for the bridge, knowing that I had a headlamp because at this point I would need it for the return. It turned out to be more like 10, but who's counting. I made it to the bridge around 2:45, meaning I had been riding for about 3:45 minutes, and that I had 2:15 to make it home before dark (keeping in mind that the bridge should be the half-way point, more or less). I had several thoughts during the ride, several of them pretty good, but two that came up often were: 1) Amy, you need to learn how to fix a flat, because even though you carry the fancy little patch kit, you have no clue how to use it, and 2) Amy, you need to invest in some decent bright blinky lights, for those times when you're out riding in the dark alone on highways in the middle of nowhere (no worries, mom, I've since purchased some bright blinky lights). 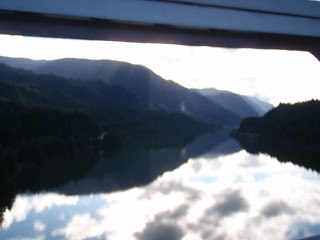 I spent most of the first half worrying about the fact that I should turn around, but once I got to the bridge and accepted the fact that I was just going to have a long ride in the dark, and that if I got a flat I had a credit card along and could always get a hotel room, I relaxed and enjoyed the gorgeous ride home-wards. And it was gorgeous....the entire day was gorgeous with killer views of the gorge, sunny skies, and bright white puffy clouds floating along. One issue in the gorge can be wind, but it wasn’t windy coming or going, so I definitely lucked out there. 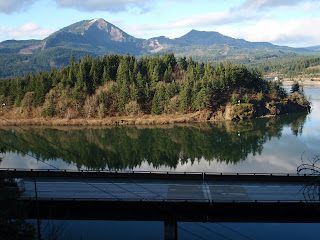 Immediately following the Bridge, the turn sheet called for 6 miles on a bike trail, during which time you would need to carry your bike up a staircase. This was true, and there were a few more uncertain spots along this trail, including some rock slides and fallen logs. Where's Gary with the chain saw when you need him? I abruptly came to the end of the trail, but fortunately, I-84 was 10 feet to my left, so I hoisted my bike over the guard rail and proceeded along the interstate. Luckily, the section on I-84 lasted about a mile, before the exit to get onto the Historic Columbia River Highway. Most of the rest of the way home was on this road and the Crown Point Highway, both of which were great windy roads with some up and down. There were lots and lots of trailheads off of these 2 roads, which I'm assuming are the famous gorge trails I've heard much about. Although I do love my bike, I still gawked as I passed those lovely trailheads. Soon, very soon.  At some point I pulled out my headlamp, which thankfully had batteries that were somewhat bright, and I had a small blinky light to hook on my back.  I made it to the edge of Gresham, I believe, about the point that it was getting really dark, and the least exciting part of the day was the ride through the burbs, but the strip malls weren't so unattractive in the dark.  The ride through the burbs, was long, probably 15 miles or so, but I eventually found my way home, although I got a bit lost trying to find the right bridge.  Frustrating to be 2 miles from home with bridges lit up in all directions, but riding around in circles trying to find one.  I did find one, and did make it home.  Hungry, but very happy after a great little adventure and 101 miles in total distance. 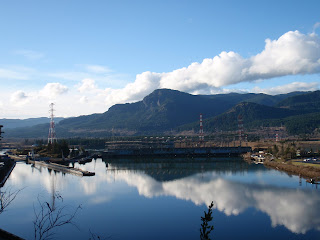 Overall, a fantastic day and a really great loop.   And a couple of firsts for me.  My first century ride, and my first time in the lovely state of Washington.   I hadn't done anything active over 3 hours in a few months, so the long ride felt great.  Not exactly time on my feet, but it felt good to get out and go for several hours and to start feeling like I'm getting back into shape.  On top of the ride, I put in another 35 miles biking and 20 miles running last week.  I'm slowly working my way back into running in hopes of some spring ultras.  My ankle feels OK.  It's not 100%, but I keep getting graston done on it and keep doing stabilization and strengthening exercises and am hopeful the posterior tib tendon issues are behind me.  Although it's fairly tender, I haven't had any of the sharp pain that had been plaguing me this fall/summer whenever I took an uneven step.  I'm still running on roads to keep my foot stable, but hope to work back into trails in the coming weeks.  I ran 6 miles today, which is my longest run to date, so I'm building up gradually, and working up to longer runs.  In the meantime, I'm enjoying my bike, and am feeling much more comfortable and confident on it.  I haven't fallen off of it since I've moved here (eeks, big jinx there), and the clipless pedals no longer petrify me.  And I've been taking advantage every chance I can to get up into the mountains to snowshoe.  I hope to work into a few longer snowshoe treks in the coming weeks, as well.  This weekend I hope to get back on cross country skis for the first time in 15 years and do some snowshoeing, as well. 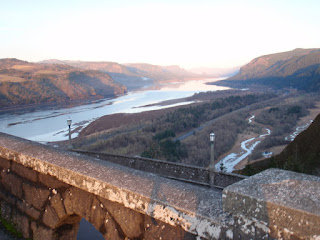 This loop will be on the list of to-be-repeated rides.  I still have a hard time believing that I live in such a beautiful place.  I miss many (many) aspects of my life in DC, and DC has a lot to offer in terms of nearby attractions, but so far Oregon is winning me over in terms of stunning beauty.  Big big trees, big views, ferns-lined trails, snow-peaked caps, snow to play in, the gorge, and the potential for forest gnomes.  What's not to love?

Wow, I'm jealous. You've inspired me - haven't gone for a long ride on my bike in too long.

Way to get some cross-training in AND enjoy a beautiful winter day. They are such gifts!

Glad you love Oregon. Still my favorite state that I've lived in.