I'm pretty sure I've never run a 15K before, hence the PR.  A friend asked me publicly on FB if I wanted to run the Shamrock 15K, and being that Sundays are often longer tempo run days for me, I had no good excuse not to run it. In fact it would be the easiest way to get in a tempo run with company--7500 of my closest friends.  And, potentially of greatest influence was the fact that the finishing award was a beer opener, which is something I need more of, so I caved.  I immediately regretted my decision, but I knew that it would be good for me to man up to the challenge of completing a short road race. Another motivating factor for signing up was that I've talked about signing up for some shorter things, but never have the balls to do so (not sure why there are so many male references in this paragraph, but I digress....), so in an attempt to face my fears, registered.

My complete road racing history over the past 15 years: 4 marathons and one 10-miler, which was cancelled mid-race in typical DC-fashion because of a suspicious package alert.  I have completed no distance under a marathon in 15 years, except for the VHTRC women's half marathon, which was my first trail race back in 2006.  That trail race catapulted me into the VHTRC world, and very quickly into ultramarathons, and I haven't raced anything under a 50K since.  The avoidance of short races all goes back to this intense dislike/fear I have for racing, and the shorter the race, the more race-like it seems.  I would opt for a 50-miler over a 15K any day of the week.

On another side note, sine February of this year, I've started using a coach. That has meant a change to my schedule, some minor panic attacks, and an almost complete lack of days off. I decided to try out using a coach for a bit of a shake-up to the schedule, and to up the work load a bit. Also, I thought it might be nice to put the planning aspect into someone else's hands, thus take that stress off of me.  Not that I ever used to really plan my workouts, but my complete lack of planning would often cause pre-race anxiety as to whether I'd trained sufficiently.  I figured if I have a coach and a schedule and follow it, I should be more confident on race day.  Right?  While the other half of me is still wondering if training by feel isn't a better means of staying injury-free, and allowing for sufficient rest to adequately recover and build.  While another side argues that I never really train hard enough, and need to up the intensity if I want to achieve the goals I have for this year. While that other half argues that this will result in a permanent body cast....I digress, again.  So far, I'm sticking to the plan, although I have had a few freak-outs along the way, mostly related to assigned speed work on the track. Tracks bring back memories of dry heaving before high school races from nerves, and are not necessarily happy places.

We've managed to work around my fear and loathing of any distance over 800 meters on a track, so I've been doing more speed work than previously, and more quality days, in general, and only take a day off about every 15 days or so.  Leading into Sunday, I'd had an "easy" week, in that my Thursday workout was only "medium" effort (typically my speed work day), my Wednesday was easy, as opposed to medium, and my Saturday long run was limited to 15 miles, but I'd still run at least 8 miles a day for the previous 14 days, and with Sunday's 15K, I was finishing up a 75 mile week. To high mileage runners, this isn't much, but I've averaged 75 miles/week over the past 6 weeks, which is up a bit from my average, which is typically closer to 65, with highs hitting 80. And a higher percentage of those miles has been at a harder effort.  To sum it up, I've been feeling a bit sluggish overall, although feeling great (and faster) some days. Getting faster is the ultimate goal.

I almost stayed in bed on Sunday, but knew that I'd regret that decision later in the day when I tried to slug out a tempo run alone that I easily could have achieved by 10 a.m. with time for brunch, to boot. Missing brunch is one of the great travesties of ultra running. Brunch is something that is enjoyed late-morning to early afternoon, and for many of us runners, that is the time that we're out running. Don't get me wrong--I love my long runs in the woods. But, I also love brunch--possibly the week's finest meal. So, my motivating factors for dragging myself to a 15K road race were primarily the assurance of time for brunch and a bottle opener.

No major goals for Sunday, except to get to the starting line and endure the misery that is a road race. 9.3 miles is, after all, only 9.3 miles. And while I don't usually feel good until about mile 17, it is a distance that I know I can complete very easily. I wanted to push the pace, and get in a good fast tempo effort, without feeling feeling like I'd really done anything too traumatic.  I do have a race this coming Saturday, for which I'd like to show up ready to put in a respectable showing.  And 2 weeks after that is Lake Sonoma, which is the one I'm really looking forward to.  Again, 50 miles is more my speed.  I fear 15Ks, but 50Ks are pretty short, too. I don't have the leg speed to really hang. 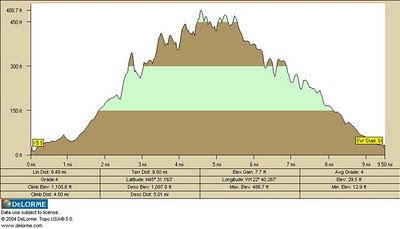 I'd forgotten just how fast road races feel.  The first mile felt like it was an effort to keep pace with the Red Lizard girls I'd kind of latched onto at the start.  We hit the first couple of miles in the mid-6 range, and then started to climb Terwilliger.  The course is a bell shaped curve, with a gradual climb from the start that builds into a steeper climb up Terwilliger, topping off around mile 5 rolling through mile 6, and then downwards to the finish.  I managed to keep it in the low 7s through the steeper part of the climb, and knowing the climb pretty well, was happy to reach the Chart House, after which the worst of the climb is over.  I surprisingly felt really strong on the climb, and passed my Lizard friends and many more. And then it was all up to leg speed on the downhill. I gained ground on the uphill passing a lot of people and not getting passed, but I was neutral (or losing ground) going downhill.  Funny, because I usually consider uphill running to be my weakness and downhill to be my strength.  But the bottom line is that I just don't have a whole lot of leg speed, and I was running downhill with roadies, and not navigating a technical downhill trail. The downhill miles were, at least in part, in the low 6's but I couldn't make up any ground in that section. After a few quick miles downhill, it was over.

Finish time was 1:02:15 (6:41 pace), around 17th overall and 2nd in my age-group.  I was happy with the result, especially knowing that I was running on somewhat tired legs, and the Shamrock course is a tough one.  I run the Terwilliger hill frequently on lunchtime runs, and it's no joke.  It was fun to see a variety of Trail Factor folks out there (kudos to Gary the Vale who ran a super speedy race and reinforced that his offer to do speed work with me is a joke) and fun to be in a very different type of race setting.  In the ultra community I get used to showing up at races where there are just a hundred or so runners, so it was fun to see 30,000+ downtown for the various races (5K, 8K and 15K).

I wore my Montrail Rogue Racers, which are technically a trail shoe, but a lightweight one that performs really well on roads.  I will definitely wear these shoes on either road or trail.  They are a very flexible shoe, which is one of the things I like about them, and make them a great road shoe alternative.

Will I try out another scary short race this year?  Probably so. Will I run a road race as a goal or focus race?  Probably not, but shorter road races are a great way to challenge myself and get in a quality speed workout, while working through my confidence issues around racing.  And, they are finished in time to enjoy brunch.

Post race brunch with running buddies: omelette with bacon and goat cheese, and cheddar cheese grits accompanied by a bloody mary.  Definitely worth it!
Posted by amy at 3:51 AM

Nice job Amy. All that hard work will pay-off when you're laying it down at Chuckanut next week. Good luck!

Yeehaa, Amy! I know exactly how you feel, and you know I know:) Awesome speed buster, lets find some more! Alas, I am curious who's your coach...wonder if you can email me.

Congratulations on conquering your fear of short races in style. Nice to add to your arsenal.
And I am 100% with you that "missing brunch is one of the great travesties of ultra running."

I really, really want to cuss right now. But I won't. But holy fucking shit, how did you just run so fast with so much elevation change!? You beat my 15k pr by a minute, girl and THAT was the race I was probably MOST proud of. GRRRRR. I mean, hm... congrats! :). And thanks for giving me a new post-pregnancy goal. That is an awesome 15k time, woman.

Awesome Amy! You are my fast friend. I also love the fact that you can rack up a fair amount of hard miles then pop off a hard 15K at that pace. Nice!

Way to go on the excellent race! Short races and speed training seem to help make long runs and races feel relaxed and easy, in addition to improving fitness and efficiency. Have a great run at Chukanut.

Of course we can do speedwork together. I bet there would not be much difference in our paces. And we don't have to run the exact same pace. Tempo runs on trails is a workout I bet we run at almost the same pace. And I would love to try to run a long run with you.
Remember your Shamrock run was after a hard week of training and I tapered all week. Great run! You are strong!

Specially the Beer openers sounds quite good as incentive to finish the race.