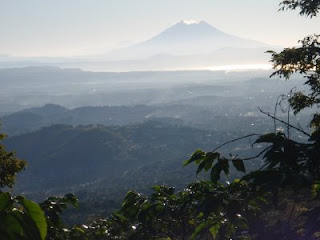 I’ve been in El Salvador now for almost 2 months. This is my 3rd trip to El Salvador and had you asked me, prior to this trip, in which country in Latin America I would never want to live, I would have answered El Salvador. Why? Hard to say. First impressions, I guess, from my other trips—too much traffic, an overabundance of shopping malls and US chain restaurants, security issues, smog, and maybe that which influences my decisions most—not a great place to run, based on some of the things I just listed.

This time, I didn’t venture out of the Holiday Inn to run during my first couple of weeks, and made do with the treadmill—thankfully placed directly in front of a TV with HBO and the food channel. I managed a couple of long runs (3 hours), but my desire to train waned quickly. Luckily, a colleague of mine knew of my running needs and introduced me to a local group of marathon/ironman types. I met up with them for the first time on a Friday morning—Jose Alberto picked me up at 3:45 a.m. to meet the group to run 30km. Sounded crazy at first—setting the alarm at 3:30 on a weekday sounds brutal—but these early morning runs have 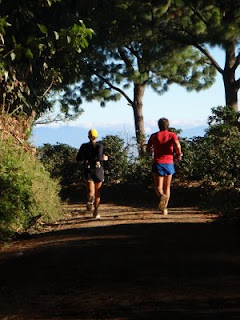 become the highlight of my week. I hate to get out of bed in the morning, but I love to watch cities wake up, so dragging myself out of bed is rewarded by getting to know San Salvador in my favorite way, running around its neighborhoods in the early morning hours. And running up the hills of San Salvador with views of the sunrise and volcanoes in the distance—que maravillosa! In terms of running, besides the fact that 90% of our runs are on roads (and the rest are on gravel/dirt roads that are as close to trail running as I get), San Salvador is a fabulous city to run in, with great climbs and great early morning views.

There are still some issues. To enjoy running in San Salvador one has to be on the streets at the crack of dawn to avoid the traffic. The drivers here are the worst I’ve seen, anywhere. Salvadorans are ridiculously friendly people—warm, helpful…but behind the wheel of a car and it’s like Jekyll and Hyde. There is absolutely no respect for pedestrians here, rather, I feel like they aim for me as a pedestrian, and they certainly don’t avoid hitting other cars. I witness the scene of at least one accident every day. Yesterday I saw the carnage of 3 accidents in one drive across town. I’ve had a couple of near death experiences, and were I to be here long term, I might consider giving up running, to avoid the inevitable outcome of someday being smashed flat by a car. Luckily I’m here only 6 months, and the chance of me getting hit in 6 months?

I’m happy to say my first impressions of running in El Salvador were wrong. And I’ve been lucky to get in with a great group and hope to influence at least a few of them to continue to venture off of the city streets and into the mountains around San Salvador and beyond.
Posted by amy at 12:03 AM 1 comment: