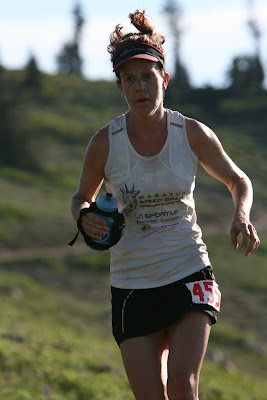 Not in the mood to write, so I'll just add some comments. 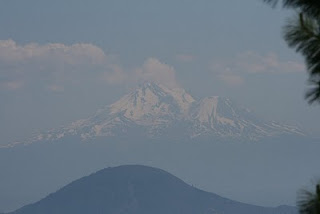 On Sunday I wanted to take advantage of being in Ashland and run some of the Pine to Palm course.  Pine to Palm is a new 100 miler in September that finishes in Ashland.  Because I still had a 5-hour drive to get back to Portland, I opted to run the last section from Ashland, rather than drive to other sections of the course, and add on to my return trip.  I ended up running an out-and-back on the last 8.5 miles of the course, so 17 miles total.  The section I saw was mainly dirt road, and was basically an 8.5 mile climb, followed by 8.5 miles down, although there is about a 1 mile climb in that last section. That last hill is going to be a quad-trasher, assuming the quads are not already trashed, and the last mile into Ashland is truly going to suck.  It's super steep and paved, and was painful on this run, so I'm imagining what it will feel like after 99 miles.

I wasn't too sore after Saturday's run, but by the end of Sunday's run, my quads were ready for an ice bath, so I enjoyed some soaking time in the reservoir in Ashland, where the water is icy and refreshing. I LOVED Ashland.  Can't wait to go back, which won't be too long, as Pine to Palm is just 2 months away.  Time to ramp up the miles.  I've got White River 50 at the end of July, Waldo in August and then Pine to Palm.  The thought of 100 miles has me a bit nervous, but we'll work through that.  My one major fear is that the last 30 miles turns into a death march. That's been the case in every 100 miler I've done, and I really don't want to do that again.

Some other happy thoughts.... In falling and smashing my knee a few weeks ago, I completely forgot about the pain in my right ankle (posterior tib tendon), and it seems to have vanished.  Both ankle seem to be healed!  Woohoo!  And this just adds to my theory that to cure one injury, you simply need to acquire another one in a different spot.  My knee is back to 100% now, too, so I'm jinxing myself here, but appear to be injury-free.  My recent face plant reminds me that anything can happen at a moment's notice, so I'll enjoy this injury-free status until the next time I crash.
Posted by amy at 3:44 PM 2 comments:

June was a busy month, with a couple of weekends filled with visits from DC friends, and another taken up with a trip to CA for pacing duties at Western States. It was also a fairly crappy month in terms of training.  The visits from friends were both on weekends where I would normally have run big mileage, but couldn't because of entertaining responsibilities, and a couple of other issues that led to two other low mileage weeks.  The week of WS I caught a cold/flu that had me out for most of the week, and the week after WS I crashed hard on my knee on Leif Erikson in Forest Park and couldn't run for a few days because of the pain and swelling.  I ended up getting x-rays, which showed that nothing was broken, but the doctor is putting me on a strength training program because my knees aren't as pretty as he'd like to see at my age.  He didn't seem overly concerned, just that my knee cartilage is showing signs of degenerative joint disease. I hope to use these knees for many more years, so I'll follow his advice and start doing some strength training.  I've never had any knee issues, other than some creakiness when walking down stairs, so am hopeful that my knees stay healthy once I can get the soreness and swelling in the left one to disappear. 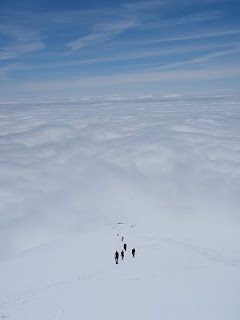 So, what I had hoped would be a string of weeks in the 70-80 mile range, has been a more consistent 60 miles/week.  I've never been one to log my training, until a few months ago, when I started logging it on Daily Mile.  I averaged out the last 15 weeks, and my average is 55 miles/week.  Sounds pretty low, but when I account for some low weeks because of travel, crashing, illness, tapering, etc, I guess it's not bad.  I'll try to bump the running average up to 70 miles/week, hitting some weeks in the 80s and 90s as I get ready for Pine to Palm in September.  The weekly mileage figures also don't take into account cross training, which I've been trying to do on a regular basis, including some road biking, swimming (altho I haven't been in the pool since April) and bikram yoga.  I've really gotten hooked into bikram since about February, and have been going 3 or more times each week.  Each class is 90 minutes, so it is a bit of a time suck, but I think it's been helping with my overall core strength, ankle stability and is great heat training.  And I definitely feel at least a bit leaner since I've been going.  And I love the heat--105 degrees and humid.  I easily sweat out a couple of buckets each class.  It kind of makes up for the heat I'm missing by not living in DC anymore (although it is supposed to reach 100 here in Portland today).  I can't say that I'm getting any more flexible, but at least I'm not getting any less flexible.  And flexibility is definitely not a sign of fitness, as there are some really large out-of-shape people in the class that can bend themselves into pretzels.  I will never be a pretzel.  I've accepted that fact since grade school when I never got a presidential fitness award because of my abysmal performance on the seated toe touch. 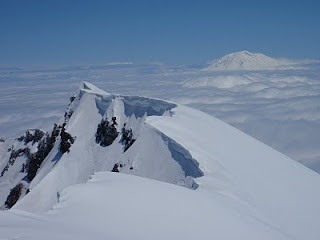 One June highlight included climbing Mt. St. Helens.  We somehow lucked out and picked the perfect day, which was cold and cloudy at the bottom, but sunny with fresh snow at the top.  The fresh snow made for good traction, some great views of the surrounding peaks, and lots of snow blindness and sun burn for members of the group.  I ended up with a red neck, which was better than the burning eyeballs experienced by others.   The hike was steep, but not overly difficult, and doing it with a group of non-runners, made for an easy hike with lots of waiting for the group to catch up. I bought my first ice axe, and am looking forward to climbing other OR and WA peaks to justify its purchase.  I'd like to do Mt. Hood, Adams and Jefferson in the coming months.

The last weekend of June I paced for Annette Bednosky at WS.  She was a rock star, placing 8th woman, and really keeping a solid pace during the 38 miles I was with her.  I've never run so much in any of my other pacing experiences.  It was good to see at least part of the course in case I ever run the thing.  I've heard good and bad things about the hype at WS over the past few years.  And during the course of the weekend, I have to admit I was pretty turned off by the entire event and hoopla surrounding it.  But a few days after the event my feelings about it seemed to shift, and I would really like to run it if I ever get the chance, but if not I won't be crushed.  There are many other (and more interesting) hundreds out there.  I'd like to run WS next year, but I'm almost more excited to run San Diego, which could be the plan if I don't get into WS.

This weekend is the Siskiyou Out and Back 50K down near Ashland, OR.  I signed up months ago, and am not really feeling in a good place training-wise to be running a race, but it will be a good long training run for some upcoming races.  I might even try to do a double, and get out on the Pine to Palm course on Sunday.  I've never been to the Ashland area, so it will be nice to see what I've signed up for in September.  SOB will be balmy, and is higher than I had realized (the course profile makes it look like it's all between about 6000 and 7000 feet--what was I thinking??), so it could really suck. But what doesn't kill me makes me stronger, right? Or leads me one step closer to dropping this ultra habit.  I'm just hoping to have fun out there, to remind me again why I keep running these things.
Posted by amy at 5:31 PM 4 comments: