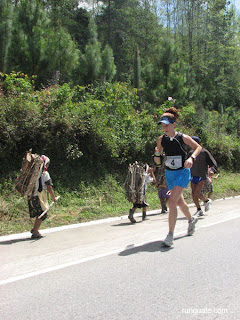 Desperate times call for desperate measures. I broke down and ran the only 'local' ultra I could find on Saturday, the 80 km Ultra Las Verapaces, which started at Km 132 on the paved road to Coban, Guatemala, and ended at Km 213, the central plaza in Coban. 50 miles on a busy highway in the mountains of Guatemala....mountains = good, asphalt = torture, no? Picture a winding highway, packed with buses, logging trucks, and weekend traffic. And you know what? It wasn't so bad....and definitely a race I'll remember.

In preparing for MMT, I've been a bit nervous about my lack of long runs since about the time I left DC in mid-October. I ran the 100Km Fuego y Agua race in December in Nicaragua, and besides a couple of 20 milers thrown in here and there, haven't done anything really long since Fuego y Agua. I'm getting in about 60 miles a week, but that's with 3 or 4 10-15 mile runs per week, and no consistent 20 + milers. I've definitely been running more miles during the week here than I do in DC, but much less on the weekends. At home, January through March are great training months with the VHTRC with lots of 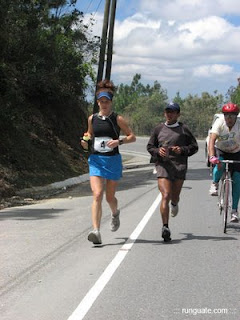 organized training events and chances to get out on the MMT trails, which when snow covered are slightly more forgiving. While I've missed out on my favorite months of VHTRC group training runs, one advantage I have had in El Salvador is that every day is 85-90 degrees and sunny. There is really no day that isn't perfect for heading out at 5 a.m in shorts and a tank top (unless you're Salvadoran, and wear long sleeves when it hits 75).
It was a challenge to get any information on the race. It was originally posted on an on-line calendar for February 28th, and then disappeared, and then reappeared a few weeks later with a February 21st date. I stalked the organizers until I finally heard back, and was disappointed when the race instructions mentioned that every runner must have a 'support vehicle.' What? The thought of needing a support vehicle frightened me a bit. Luckily, a friend from Peace Corps Paraguay, who is doing a second stint with Peace Corps El Salvador, jumped at the chance to get away for the weekend, and agreed to accompany me. Thanks Alyssa!! 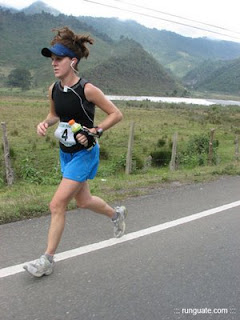 A Guatemalan running buddy in El Salvador mentioned that the last 30 km was uphill into Coban. I figured if nothing else, I would get in some good climbing practice and it would be a chance to see if my climbing has improved. San Salvador is seriously hilly, and my running group hasn't caught on to walking the ups, so I feel like my climbing has improved in my time here.
We drove the course on Friday, because we had no other option. We were staying in Coban, and the road into Coban was the race route. It was scenic, and we got rained on as we passed through some really nice cloud forest around 1700 m. It doesn't rain in El Salvador from November through April, so it was a pleasant change. There is a large nature reserve along the route called the 'Biotope del Quetzal,' which is reserve for the quetzal (beautiful blue birds that live in cloud forest habitat in Central America and have become endangered as their habitat has disappeared). The first 25 miles of the course was up and down, eventually descending into a valley for about 15 miles of relative 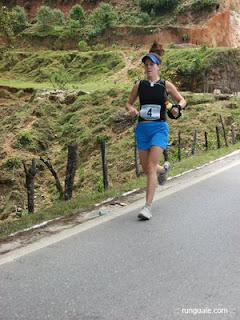 flatness, before beginning to climb at about mile 40 up to Coban until the last couple of miles that descended into town with one final little climb up to the plaza. Or at least that's how I remember it.
The race started at 11 a.m., which meant a really sunny, somewhat warm run. We got some mist heading through the cloud forest, which was appreciated. There were 26 of us that started, and 20 that finished. I had been told that no one had ever not finished, but there were fewer startes in the 2 previous years. I was in the lead briefly at the beginning, and then again at some point in the first half, although I didn't realize it. Some guy surged ahead early, but apparently he either wasn't a participant, or dropped early, because eventually, I realized the radio mini-vans were reporting me as the leader. I went back and forth with last year's winner, although I didn't know it at the time, and at one point asked him if he was running the race. Oops. 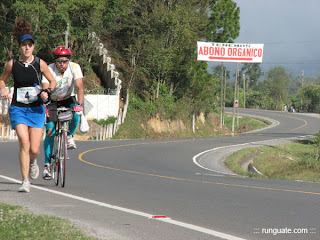 Aid was roving in nature, coming in a variety of different forms. I had the pleasure of having my own personal escort, Rigoberto, a friendly guy from Coban, who rode his bike patiently by my side the entire run, surging ahead to hand me water as needed. In addition, I had various other 'escorts', 2 police pick-up trucks, the guys from RunGuate.com, 2 micro-buses from the local radio station blaring latin pop and frequent race updates, and a bandit motorcycle heading into town.
I ran a 6:56 which was good for 1st overall and beat the old course record of 7:08. I was super psyched to break 7 hours, as I was guessing I might finish closer to 8 hours, based on the climbs. I ran the first 40 miles without walking a step, which was a definite first for me. I must admit it was partly because I didn't want the radio station to proclaim loudly to all, "The gringa is walking." I hit 25 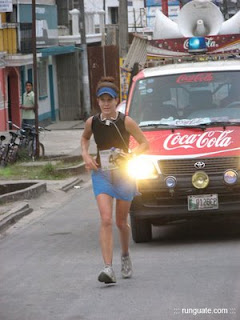 miles in 3:25 and ran the last 25 miles in 3:31. I really expected to run the second half about an hour slower, so was happy that I was able to maintain a good pace throughout. I walked about a half kilometer total on a few of the last climbs with the radio blaring behind me, "The North American is walking, although she's walking quickly." ("Ay dios! La norteamericana está caminando pero está caminando rápidamente!") The radio commentary throughout was pretty humorous. At some point they mentioned that I had previously run a 100 miler, and then commented that I had also run a 135 miler. I considered popping my head in the van window and correcting them, but figured it would be hard to explain while running.
I drank gatorade, water, 8 gus, a banana, and a pack of shot blocks. My stash of treats (gels, etc) is depleted, so I basically used what I had. I have long since run out of Nuun, which is what I always prefer.
Most of the runners were from Guatemala City or Coban. Guatemala hosts 3 ultras each year; a 50k in the capital and a 100k that runs from somewhere to the ocean, and this one in Coban. All 3 of the runs are on 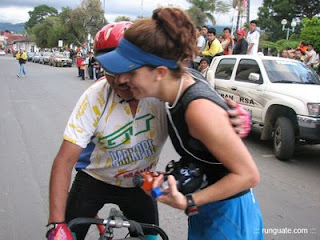 pavement. When I asked some of the Coban guys why they didn't take advantage of all of the great trails and side roads, they commented that they do all of their training on trails or dirt roads. Huh? While it was a fun and interesting event, there are some great options in the area for a fabulous trail event. They seem to feel it would be too difficult to pull off an ultra on trails, and that the ultra itself would be too difficult. I would definitely go back for a trail ultra in the area, although I doubt I'll make it back for another road version. Although I had a blast.....
If you ever find yourself in Guatemala in February I recommend giving this event a try. As with ultra communities in other parts of the world, the one in Guatemala is a fun and interesting bunch, that will go out of their way to help you out and make you feel at home. I hope to return to the Coban area someday soon to play tourist.
(all photos are courtesy of RunGuate.com)
Posted by amy at 11:10 PM 8 comments: