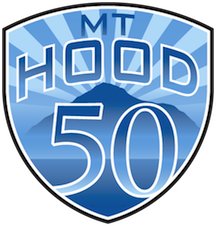 First, kudos to Todd for quite possibly the coolest logo ever--well, to me, anyhow, as I love Mt. Hood and how she peers down upon us in Portland on sunny days, tempting us to escape the city and come play.  Earlier in the year I had planned to run White River 50 again (which was on the same day), but when I saw the logo and heard there would be pint glasses for finisher's awards, I opted to run the Mt. Hood PCT 50 instead.  That's not the complete story, but it works for now.  And check out the finisher's pint glass--pretty sweet, no?  In the end, there were several friends heading over from Portland to run, and I'd never run up near Mt. Hood, so opted to stay local and explore some new trails.
Pam had put a little pressure on me to go after the course record, noting that it was soft.  It was hers, so I doubted that it was too soft, and I had no intention of racing hard with Waldo 3 weeks away. But, it gave me something to shoot for, assuming I didn't have to kill myself to get it.

There's a long'ish gentle climb up from the start/finish to the next aid station at mile 33.  I mixed in a bit of run/walk, as I wasn't feeling a lot of oomph.  I wasn't suffering, just didn't have the motivation to push the pace much.  It was nice to see familiar faces at the aid station up top, but was disappointed when Rick couldn't confirm that the course immediately went downhill.  He was right, as we ran along top for another mile or so, but eventually the nice long downhill started, and my mood improved. Then there was one more slog up to the turn-around aid station, which was a happy sight, as I'd now be moving in the direction of the finish line.  I made sure to time when I passed the next female, as she hadn't been too far behind at mile 14.  Heading down from the turn-around, I was happy to see she was now at least 30 minutes back, so I didn't have anything to worry about in terms of staying in front--while I wasn't feeling very competitive, I also never like to be passed in the last 10 miles after leading all day.  I could slog homewards to my heart's content, although  I did still want to get the course record, so was motivated to make an effort to keep moving at a reasonable pace. A nice slog up to the Tuesday night group's aid station, followed by a nice long down to the finish.  Nothing too eventful in the final 11 except for some brief stomach issues, which necessitated a not-very-private stop about 2 miles from the finish due to poor planning and the emergency nature of the stop, and lost a few minutes and a  place to the poor soul who also had to witness my somewhat-public bathroom display.
In the end, I didn't run the second 22 much faster than the first 28, and finished in 7:30. Pam had called the record soft, and I'll add that the record is still soft.  Throughout the day I didn't have a whole lot of juice, and while at times felt like I was cruising along OK, other times felt like I was shuffling through the motions. The word "blah" sums up the race for me pretty well in terms of effort.  The weekend on the whole was a big thumbs up, as it was a fun weekend with friends in a beautiful spot in . There are so many trails and lakes and places to explore around , and being up there this weekend was a reminder that I need to get up there more, and just how lucky I am to live in .  Lots of great times were run by friends out there, and it was fun to see so many familiar faces on trail. Even after his slow start with me, Ian went on to dust the previous course record in 6:29. Laura Kantor completed her first 50 miler in a great time--she is truly an inspiration. Yassine, always strong, ran well for second, and cheered for everyone like a crazy man throughout. Randy, always downplaying his ability and his training, rocked a sub 7:30 finish. The post race grub was good, and it was fun to get in a nice post-run soak in with new friends from and a birthday boy from Sisters.  Add in a chiropractic adjustment from some chiropractic students there to offer their services (which helped to get some ribs knocked back in place that have been bugging me for months) and the post-run celebration was perfect.  Todd and his merry group of volunteers put on a great race--I expect that this one will grow in popularity again.

Post run, I didn't have much soreness except for an exhausted right hip flexor.  My left foot continues to have some weirdness in the flexor something something muscle, but it's more of an irritation than an issue. All was good until Tuesday night, when I crashed hard twice on a FP run, which has resulted in a lighter week than desired.  Just a bit of bruising to my pride, more than anything, although my right knee is a wee bit bruised and irritated.  Crashing is so incredibly frustrating. I'm hoping to hit it hard next week before a brief taper into the Waldo 100K the following.  After that, I have absolutely no plans.  I've been looking to sign up for something, but I have no idea as to what that will be.  Suggestions?
Posted by amy at 7:16 PM 16 comments: