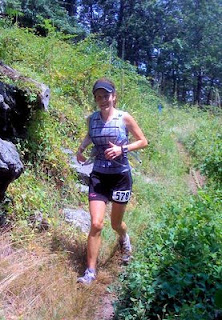 The Catoctin 50K is an area favorite. Run in the peak of summer heat in DC, it's usually a torture fest that everyone seems to love to hate. Last year was one of those years; 90's and humid. This year was blissful; 70's with some rain at the start. I had goosebumps, which is not usual in DC around this time of year, and had I brought a long sleeve shirt, would have been dumb enough to put it on for the start. Luckily I didn't bring anything warmer than a sleeveless shirt, as I warmed up in the first 100m.
This was my second Catoctin. I can remember saying after last year's run that I had to make an effort to do some more training runs out on these trails--might be the best the DC area has to offer. We so often go out to the Shenendoah or MMT trails, but Catoctin trails rival them in technical difficulty, and they're only an hour's drive from DC vs. a 90 minute or more trek out to the others.
I ended up putting on my Hardrocks Saturday morning before I left the house, mainly because I was lazy and they were beside the front door. I put them on thinking they were overkill, as I usually reserve them for MMT or similarly rocky trails--but I'm glad I did. Even after running on the Catoctin trails a couple of times, I had forgotten that they are similarly rocky to MMT. Smoother rocks, perhaps, but a lot of rocks. As much as I don't want to like the Hardrocks, they don't tear up my feet, and they're the only shoe I trust for really long runs. I hope to find a light weight shoe that I can replace them with for less technical stuff, but so far, no luck.
I went out pretty hard, and stayed in about the same spot the entire race. Besides the first few miles, I didn't run with a soul throughout. To be honest, that's kind of how I like it. I don't really like running with people on most occasions, although there are exceptions. Especially on trails, I find it hard to not alter my pace if I'm running with someone. It's rare to find someone who climbs and descends at the same pace as I do. I'm not so strong going up, but I love to come down. Catoctin is an out-and-back, which is a good way to see everyone once, and is really nice on a local run like Catoctin where you know most people and can chat a bit as you pass. I ended up in 5:54, which was an improvement over last years 6:17 and good enough for 1st female and 8th overall. I'll save my fear of racing for another blog entry, perhaps.
I did get lost once, which drives me nuts. Apparently Catoctin used to be a harder course to follow, but re-blazing efforts have helped make it a pretty easy course to follow. Except when you make a wrong turn, go back and check it, and continue down the wrong path. I added about 3/4 of a mile to a course that was already long, so ended up registering about something over 33 miles on my Garmin.
Kevin and his merry crew of volunteers put on a great race. Popsicles at every aid station and a great post-race party afterwards. Good times.
Posted by amy at 10:52 PM